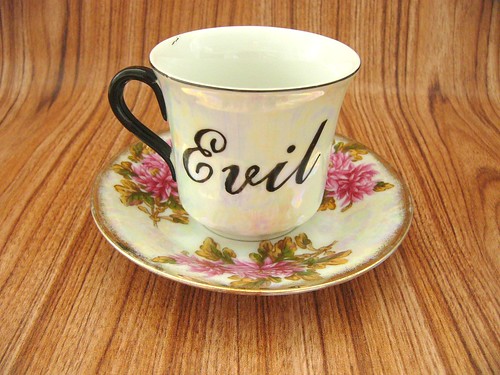 • This tea cup from Vandalized Vintage. I have been saying for about a year that everyone better watch out once I get a display cabinet, because I’m going to start a tea cup collection so hard that everyone is just going to be left behind, sobbing. My Nana is going to sell me her GORGEOUS display cabinet, the display cabinet from my childhood (!) so I can finally get my tea cup collecting dream off the ground. She also gave me a beautiful hand painted saucer that her sister gave her, so it’s officially my first piece. But there will be more and many, including some vandalised pieces! Yeah!

• Doodling helps your memory! I have always been picked on by teachers, lecturers and meeting facilitators for absent mindedly doodling my way through conversations and meetings. I always argued that I was actually listening, and that doodling helped me absorb it all and VOILA now science has proven me right. In your face, naysayers!

• My iMac. I don’t know when it’s going to stop being awesome. Probably never. You’ll just have to deal with it. I should name it, but it doesn’t really have a personality or a gender just yet. My old computer’s name was Leila (but Nick spelt it Liela, woops) as we had a Futurama theme going on with our network. I think we need a new theme! (Do other nerd households do this?!)

• My “Everything’s Okay” drawing for rand rand renfrow renfrow‘s zine might be going on the cover. Exciting! I made a zine once, and then I lost interest. This one will be sold in Austin and Houston around South By Southwest time, so if you’re in the region track it down. I hope he sends me one because I don’t have enough for a bus fare to Texas :/

• The State Library of Queensland are on flickr and they are uploading all these awesome vintage photographs. I like knowing about where I come from, but Brisbane seems to have a sordid and buried history so you really have to dig for information. For example, I just found out about The Battle of Brisbane the other day and I was stunned that I never knew about it before!!

• I don’t want to alarm anyone, but over 100 people think my drawings are tops. I didn’t think more than 30 people would join up, CRAZY!