On Saturday I went to the Equal Love rally to march in support of same-sex marriage. I went to support this key human right for all people, even though I am privileged insofar that my relationship is legally recorded as a marriage. The government and religion should have little to do with each other, and much MUCH less to do with dictating who can love who. Recognising same-sex marriage will not harm my marriage to Nick, nor will it destroy society; in fact I might be so bold as to venture that it can only do GOOD! People will feel less anxiety when it comes to talking about their relationships; more children will grow up in loving homes with parents that are in a legally recognised couple; and who can argue that love is bad? Surely you’d have to have fairy floss for brains. 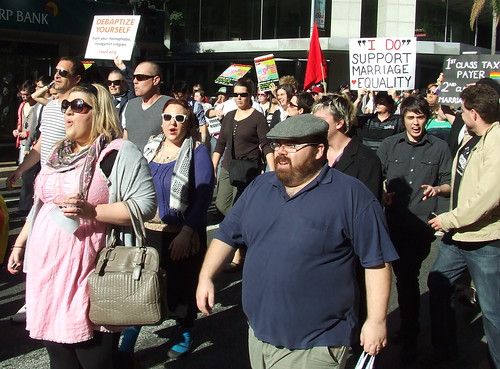 If you support love (and you’re Australian!) please make a submission to the Senate enquiry into the Marriage Equality Amendment Bill 2009. The last bill was rejected because the anti marriage equality groups pulled more numbers than the pro same-sex marriage groups even though the last Galaxy poll declared that a majority of Australians support same-sex marriage. The other side has mobilised and they are a minority – why are you sitting on your arse waiting for other people to pitch in? Go make a submission to the Senate enquiry online now!