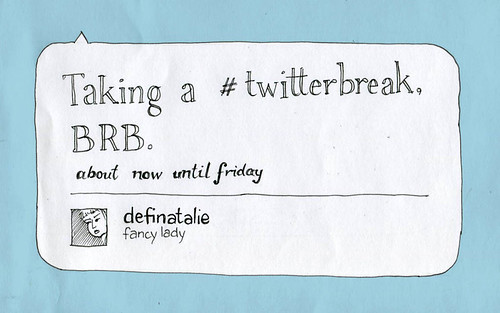 I am a huge advocate of Twitter, I admit it without shame. At first I didn’t really get it because I thought it was just a standalone status broadcaster, kind of like facebook but without the risk of friends and family members tagging awful photos of you. After finding Plurk I even declared that Twitter was dead to me and that I was going to have babies that resembled chubby Gantt charts (ok I didn’t say that, but I may have thought it at the time).

So, cough, that was a bit premature. I found out that the strength of Twitter is in the people you follow and interact with. You could probably say that about all social media, but Twitter is different in that you’re not bound by the interface on twitter.com because they’ve released the API – which can be used in so many different and amazing ways. The most significant being desktop and phone apps like Twhirl, TweetDeck, Tweetie, Twitterrific and my favourite, DestroyTwitter.

Through these clients you can take Twitter everywhere, and as a result you can take your followers everywhere too. I’m never alone on the bus, because I can sign in to m.slandr.net and tell people about the songs the bus driver is singing, or I can muffle giggles as my friends have ridiculous conversations. I think that Twitter clients have really encouraged people to use Twitter as a platform for life casting, and instead of being a site you visit once a day to catch up on activity… you find yourself running your Twitter client in the background all day and night just so you don’t miss out on anything. It’s really not a medium that lends itself to “catching up” on because of the sheer volume of tweets, as well as the reluctance of the site and client designers to institute any real threading for tracking conversations. I like it that way – it’s like a conversation you have with your IRL friends, and if you enter the conversation late you’ve already missed the momentum and excitement of the moment.

Of course, if you live in Brisbane you get the opportunity to turn your URL friends (that’d be your online friends) to IRL friends through BTUB meetups. Brisbane’s Twitter community is very active and very friendly, and meetups in the vein of Sydney’s STUBs and Melbourne’s MTUBs were adopted last year and very quickly became a date claimed every month on most Brisbane Twitter users’ calendars. I never expected to meet so many fantastic people, or to become so close to them!

This is where Twitter gets really interesting. Instead of having that distance between the URL and the IRL, strong relationships and affiliations start to come together quickly. Where I would have had no problem mouthing off at someone for saying something ignorant or whateverphobic and walking away, I found I really needed to start considering the impact of my reprimands and how it could affect the tight knit social group. The people on the other end aren’t faceless anymore, they’re friends and acquaintances. I also have started wondering if I see the networking platform as strictly professional, social, casual or a curious and awkward mixture of all of the above.

So, I’ve decided to take a few days break to see how I can reflect on this. Whether I like it or not, I am developing a persona online. You are too – whether you put your name on your interactions or if you use a nom de plume. Like most people, I have flaws and foibles but on platforms like this blog… I tend to gloss over them a bit. It’s not that I want to appear as if perfect or completely palatable by any means, but opening up your personality and life to complete strangers and new acquaintances is a big deal and I feel like I’m opening myself up to things that both scare and enthrall me. It’s not just “the internet” anymore, Toto!

Do I need a personal branding strategy, or should I just fly by the seat of my pants? Will I be able to make it until the end of the week without broadcasting the minutiae of my days? Can I stand not being able to commiserate with and/or congratulate the people I have come to care about as they talk about the things they encounter in their lives?