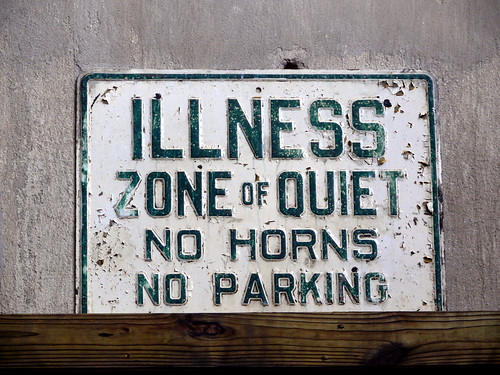 This week is National Invisible Chronic Awareness Week in America, and even though I’m international I thought this questionaire would be helpful not only for myself, but for readers of my blog!

1. The illness(es) I live with are:
Type 1 diabetes (T1D), depression and anxiety with a little tendinitis (and arm cysts!) thrown in

3. But I had symptoms since:
T1D – a few months before being diagnosed (generally you don’t let that shit slide or else you get dead!)
Depression and anxiety – since 1995
Tendinitis – since about 2005

4. The biggest adjustment I’ve had to make is:
Having to interrupt my day to jab myself and eat on a schedule, being a slave to doctors (currently my beef is that they will only give me 1 repeat of insulin so I have to keep going back!)

My depression isn’t as severe as it used to be, I think learning coping mechanisms has helped me a lot in my day to day life. Surprisingly, my anxiety has been largely ignored by the doctors and shrinks so I’m still doing unproductive things like not answering calls from numbers I don’t recognise, putting my phone on silent for weeks on end, having trouble going outside by myself, etc.

I have to wear a wrist brace when I’m working, and if I really aggravate my arm I can’t work for days on end. It interrupts my workflow, and affects my ability to consistently earn money. It also makes me feel pathetic and useless when the pain is at its worst.

5. Most people assume:
I’m fat because I have type 2 diabetes. No. I’m probably fat because I give myself too much insulin, which results in fabulous to low Hb1ac levels (the coating of sugar on my blood cells) and weight gain. T1D sufferers who are very skinny (as a result of rapid weight loss, not natural body weight) likely have very high Hb1ac levels, which leads to diabetes complications like blindness and kidney disease. I will likely meet my end with a stroke or heart disease, maybe even an amputated limb.

People assume that I’m useless and aloof because of many of my anxiety symptoms. When I was a child and teen, people used to get so frustrated with my avoidance tactics and would reprimand me because I would refuse to call places when they asked me to, or because I was socially awkward.

When I wear a wrist brace out in public people are generally nicer and more helpful. Which is surprising considering when I had a bung foot going to Melbourne in December, I had to use a walking stick and some people were rude and inconsiderate. On the flight down, many of the families with children waiting to board encouraged me to get on the plane first but I was nearly bowled over by some impatient special snowflake who didn’t have any trouble walking, nor did he have children!

6. The hardest part about mornings is:
Having to wake up at a timely hour to have my insulin. If I don’t stick to a schedule, everything gets screwed around a bit.

7. My favorite medical TV show is:
I don’t really like watching the real life shows, but I like Scrubs.

8. A gadget I couldn’t live without is:
Insulin pens :D

9. The hardest part about nights is:
Having hypos at 3am and having to get up and force carbs into my face when I don’t want to eat.

10. Each day I take [?] pills & vitamins.
I’m really bad with taking pills and/ or vitamins!! I’m lucky in that pills aren’t really a part of my health care regimen, even though a multi-vitamin probably wouldn’t hurt!

11. Regarding alternative treatments, I:
Certain people have tried to convince me that my diabetes can be cured with homeopathy and a raw vegan diet. Righteo!! If there was a bona-fide cure I’m sure I’d have a mailbox stuffed with excited proclamations from Diabetes Australia/ Queensland!

I want to get hypnotised and see if it helps my anxiety. I’m very curious about it because I have a few people close to me who have been helped by it.

I’ve tried a course of acupuncture for my tendinitis and while it provided short term relief for a matter of hours, it really wasn’t the relief I was looking for (IE: LONGTERM!)

12. If I had to choose between an invisible illness and a visible one, I would choose:
I really have no experience having a visible illness, besides wearing a brace in public occasionally. I can’t conceive of a life without diabetes – sometimes when I have dinner with friends I find it strange that they don’t whip out their insulin pens and jab themselves when I do. Most of the time, people don’t even notice when I inject myself!

So yeh, short answer: I can’t choose, and I don’t know differently.

13. Regarding working and career:
Having hypos in the workplace can be very embarrassing sometimes, because a low blood sugar attack can make one look quite drunk and disoriented. Many workplaces I’ve been in I’ve had to simply wait until I could excuse myself to get sugar – which is completely unfair, I know.

Having an anxiety disorder and working has been challenging, but generally it has helped me confront things that I would have put in the “too hard” basket.

14. People would be surprised to know:
That I would be dead if insulin wasn’t on the PBS. It’s expensive as it is, but it’d be 20 times more expensive if it wasn’t subsidised by the government.

15. The hardest thing to accept about my new reality is:
I’m going to die younger than Nick and my friends.

16. Something I never thought I could do with my illness was:
Go overseas. I’m still not sure how I would manage it, with the time zone changes and what not… it’d royally screw up my insulin regimen.

18. Something I really miss doing since I was diagnosed:
I miss not giving a shit about when I eat or what I eat.
I miss the strength I used to have in my wrist.

19. It was really hard to give up:
Smoking. I’m still weening myself off them and I’m not the type to get all sanctimonious about it. I actually really enjoyed smoking as a way to alleviate some of my anxiety!

20. A new hobby I’ve taken up since my diagnosis is:
I’m trying to do new things in my creative practice that don’t involve such intensive use of my wrist. Right now I’m making rosettes out of ties.

21. If I could have one day of feeling normal again, I would:
Go traveling and eating.

22. My illness has taught me:
How to be a control freak.

23. Want to know a secret? One thing people say (about my illness) that gets under my skin is:
– XXXXX CURES DIABETES
– CAN YOU EAT THAT?

24. But I love it when people:
Look after me when I’ve had a hypo or panic attack. It makes me feel like less of a freak.

25. My favorite motto, scripture, quote that gets me through tough times is:
I usually just say to myself that tomorrow will come like yesterday came, and pretty soon it’ll be next month. It really helps me feel like there will be a future when I think the world is going to end.

26. When someone is diagnosed I like to tell them:
Ask me anything.

27. Something that has surprised me about living with an illness is:
How little some medical professionals know. Like, when I’m in hospital getting hourly obs – THE NURSES ALWAYS COME IN AND PRICK THE TIP OF THE SAME DAMNED FINGER.

a) Don’t stick the tip or the pad of my fingers. There are helpful nerves in them! Lance the side of my fingers where there aren’t as many nerves to damage.
b) DIDN’T YOU DO ANATOMY AS PART OF YOUR TRAINING?
c) OW! That hurts! Rotate those injection sites.

28. The nicest thing someone did for me when I wasn’t feeling well was:
Get me orange juice or something similarly sugary. There’s no one time, it’s not a standalone occurrence, but my friends and loved ones always know what to do!

29. I’m involved with Invisible Illness Week because:
I never really considered that I have invisible illnesses, but I do. I always like to imagine I’m a normal person, but I’m not. That’s a delusion that healthy people don’t have to suffer.

30. The fact that you read this list makes me feel:
Thankful and a little weirded out, considering this blog is so public! But I think it’s important to talk about our health, especially about depression and anxiety.

Disclaimer of sorts: This awareness week was started by a Christian ministry, and while I am an atheist I think it’s important to make people aware of chronic invisible illnesses. I also think it’s important to treat them with medical science, not just prayer – like in the case of the diabetic 11 year old who died because her Christian parents refused her medical treatment, preferring to pray for her healing rather than providing her treatment.
/controversy