I have a wrist injury from my job as a graphic designer, as you might know, so I’m always on the lookout for pointing devices that don’t aggravate the pain on a daily basis. A few months ago I got rid of the Mighty Mouse that came with my iMac because it has no ergonomic value whatsoever and the little scrolling nub was forever getting stuck. I moved to a Logitech MX something-or-other, and while it looked pretty ergonomically sassy, it cursed my thumb with additional pain!

I was quite stoked to win a Bamboo Touch from @WacomAustralia the other week, because I have been envious of the touch pad on Macbook Pros and the Touch looked like it would be relevant to my interests. I thought I’d take a few photos and write a little bit about how the last week or so has been since I have gone mouse-free.

I like to document receipt of exciting new toys on my dailybooth! 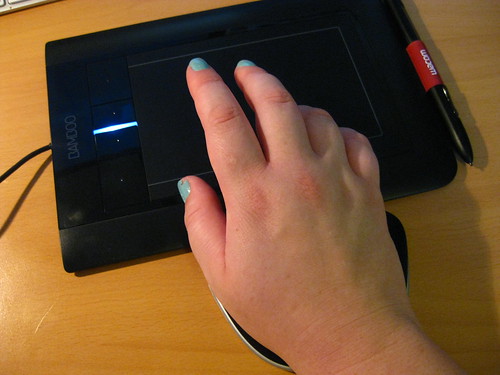 Here, you can see me debut as a hand model. That rest underneath my hand is a Fellowes gliding wrist support. It is super! It’s meant to work with a mouse, but I’m using it with the Bamboo Touch just fine.

It’s pretty easy just to rely on the Touch for general computer use and web browsing. I really enjoy flicking down and back and forward! I’ve never used a Macbook Pro for long enough to understand the multi-touch gestures, so I’m not sure what I’m missing out on with the Bamboo Touch because it’s limited to only two finger gestures. 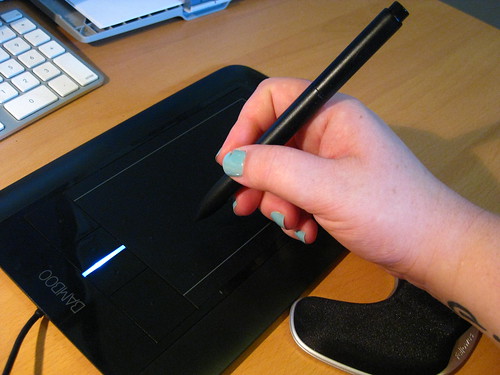 In this photograph you can see my demonstration holding the stylus. At my old job I had a Wacom Graphire, and the stylus was built much sturdier, but the Bamboo stylus works fine. I do accidentally hit the side button a bit though. 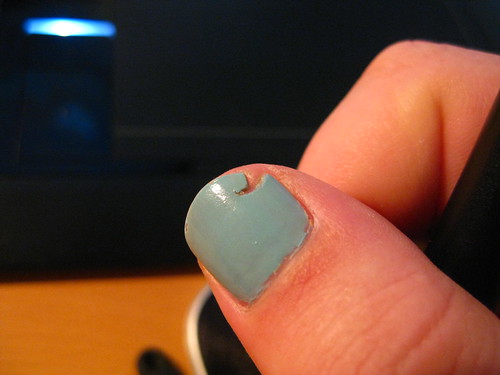 Here you can see the injury I sustained after angrily washing up a food processor blade a few weeks ago. Treat those things with respect, it hurt a lot! 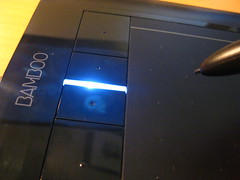 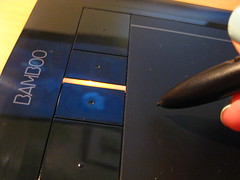 Err, back to the Bamboo Touch! The nifty light tells you when the stylus is close enough to the surface to disable the Touch sensitivity (around 1cm above the surface). Sometimes I scroll by flicking with my fingers but use the stylus to click around, and it can confuse the device (and me). When I have used the stylus in Photoshop to draw I have noticed a lag but it has been wonderful to use in Illustrator. 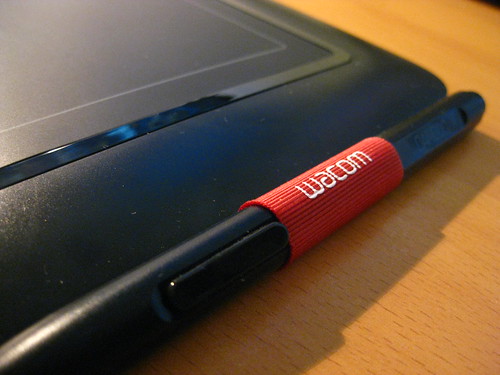 The pen holder is awesome and looks cute, but I very rarely remember to put my stylus back in there. I tend to confuse it for my Faber-Castell Pitt pens too! 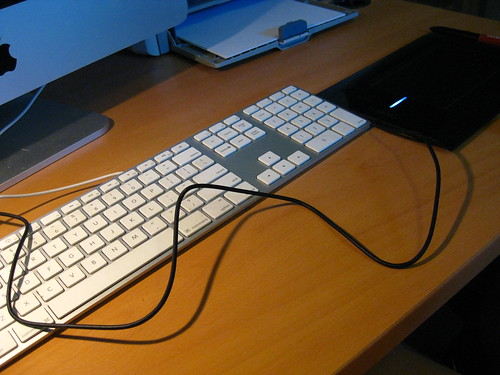 A couple of annoying things:

Dudes, what is going on with this cord business? The Bamboo Touch really needs to be cordless. In all honesty, I have actually been using it flipped around and on the “left hand” setting so I can trail the cord behind my iMac. Cords hurt my life, boo!

I have had to switch to Safari for my browser, because the scroll always gets stuck in Firefox. This is kind of annoying, but now I only use Firefox if I need to use Firebug or other similar web design extensions. One of my friends has the larger Bamboo Touch and runs it on a PC, and hasn’t had a single issue scrolling in Firefox. I’ve been googling to find out if it’s just me, or if it’s a common issue using the Bamboo Touch with Firefox for Mac.

The surface is no where near as nice and glossy as the MBP touch pad. Sometimes it really irritates me because my finger can’t glide smoothly and I will “drop” files mid-drag. The left side of the device, where all the buttons are, is much glossier – I wish they’d used that surface for the Touch area! It also picks up a lot of lint, which has the potential to confuse the sensors. Sometimes my cursor skips erratically all over the screen and there appears to be nothing interfering with the Touch zone!

My hand feels less pain because I am moving it in different ways, instead of moving it only one specific way over and over. I have been trying to move my arm from the elbow instead of the wrist (the Fellowes gliding wrist support assists with that) so that might be helping too!

Aside from some minor lag in Photoshop, the stylus works perfectly. This small size is more than adequate for my needs, even after using an A4 sized no-name tablet for a couple of years! It’d be nice to have a little more sensitivity too, but if this is your first graphics tablet you probably won’t miss it.

Overall I’m really happy with the Bamboo Touch, and I’ll continue to use it as my main pointing device. I really prefer not to use a mouse at all because it encourages small movements over and over and over in the fingers, wrist and arm which leads to RSI. I enjoy the freedom of movement when using a graphics tablet, even though it takes a bit of practice to develop accurate and quick pointing.

Lastly, the Bamboo Touch being touched!!