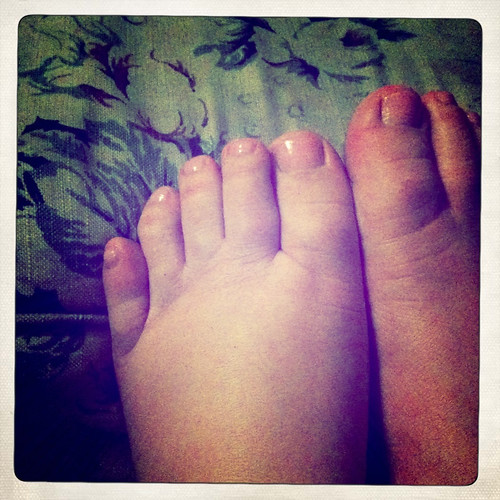 I just had my first ever pedicure and it was THE WEIRDEST EXPERIENCE OF MY LIFE. Nick and I decided to pamper ourselves after all our intrepid plodding last week, and surprisingly Nick was the one who was enthusiastic about getting a professional to tend to our sore feet. I was less into it because it takes a lot for me to let someone into my personal foot bubble of space.

Being pretty terrible at small talk I like to avoid most feminine-oriented beautification services (please see chapter 4: My Fear of Hairdressers) and I was quietly terrified when Nick looked up a place to get our marital mani-pedi. When the technician (I think that’s the proper job title!) put my feet in a warm bath that vibrated I started to get into it, but then she snuck her hands in the water and started rubbing my heels. Cue the freak out.

As more of the 75 minutes of pedicure torture ticked over I awaited the next attack on my poor unsuspecting feet. Exfoliation, massage (I actually liked that bit), some foot… shaving with a pumice paddle, a bunch of oily moisturising stuff slathered from toes to calves, and then… the paraffin wax. I thought my blood was going to boil in my veins, it was so hot! After it cooled it sort of felt nice, despite the squicky feeling of stuff between my toes. After having some time to myself while the wax set I grossed myself out by thinking about how much dead skin had been sloughed off in that little room. Ew. Finally it was time for some polish – a pale pink.

The whole process was a little bit shocking to me, having never participated in such an experience before. Once I tuned out a little bit and had a giggle at all the hilarious comments on the Grill’d blog post I started to feel like I was being rightfully pampered. I’m sorry to the lovely woman who professionally tended to my feet, I’ve totally forgotten your name, but seeing as you’ve handled these feet I feel we are the most intimate of friends now.