If you follow me on twitter or tumblr you might know that one of my photos was submitted to a hateful and fatphobic (transphobic, ageist, etc etc) facebook group: “There’s a weight limit on leggings & skinny jeans.” I have posted photos of myself on the internet for years, and have copped a huge variety of flack (but WAY more compliments!) So I wasn’t really upset that someone had taken a photo I had posted to an outfit website, and submitted it to this nasty group, after all it was just a matter of time – and who knows, more of my photos could be posted in any number of bigotry-filled hideyholes online. I have heard so many jabs at my fatness that insults just sound like caricatures of other insults these days, but for many other people it is really upsetting and distressing. 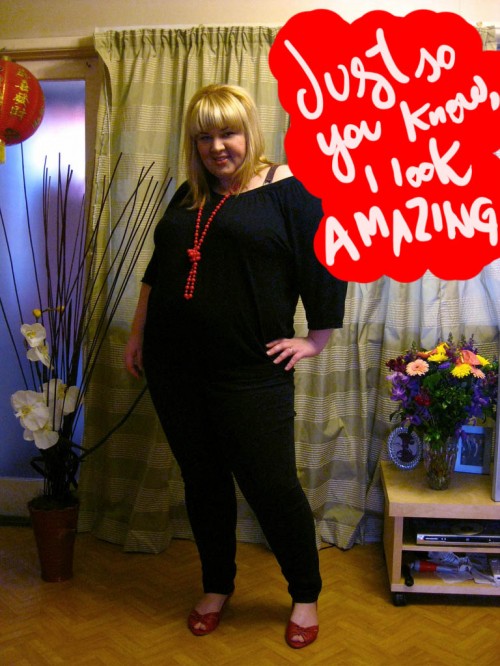 Firstly, you know how I feel about body shame that is dressed up as fashion advice. It’s bogus. No one should be harassed, mocked or attacked for wearing clothes (or NOT wearing clothes). There is absolutely no weight limit on leggings or skinny jeans. There is, however, an abundance of people who are falling into a trap of being way too invested in what other people do, and wear. Why do they care so much? Probably because it gives them a sense of being better than other people, but that is a terrible foundation to build one’s self esteem upon. It’s a foundation that benefits business, not people, and it suits the beauty, fashion and weight loss industries to have every day people like you and I reinforcing arbitrary beauty standards that help shift units so people can feel better about themselves by putting other people down, therefore reinforcing arbitrary beauty standards (stop me before I get sucked into this infinite loop here guys).

I reject those arbitrary standards. I reject the imaginary line between skinny and fat, the line that’s a size 6 for some people and a size 14 for others. And if you’re friends with a fat person, they lose 4 imaginary dress sizes on the basis of that friendship (“Oh honey, you’re not fat! Don’t be so mean to yourself!”). I reject the beauty ideal. I reject the idea of the “flattering outfit”. I reject the gender binary. I reject being ladylike. These standards are not nobel things to uphold – they trap us, and constrict us. They push us into target markets so we can be sold things more easily. And while I can say with 150% gusto that I reject these things, I can’t help but toe the line sometimes without even realising. Societal conditioning is that strong, it’s that pervasive.

So when someone makes fun of me for: being fat, wearing “unflattering” clothes, looking like a man, being a bitch, having acne, not being polite or gracious, wearing too little perfume, wearing too much perfume, having gunk in my eye, wearing a t-shirt that shows my belly when I raise my arm, perspiring a lot or laughing too loudly… It’s totally personal, but then again, it totally isn’t. We all have a variety of unique and personal characteristics, and they might read a little differently depending on where you live, what you look like, how much you earn, the colour of your skin or what gender you are, but at the end of the day those criticisms are about hemming you in and disempowering you. I can’t even get angry at people who insult me anymore because I know most of us are conditioned to think this way.

I know for a FACT, despite the protestations in this particular facebook group, that seeing a fat person in leggings or skinny jeans will not cause injury. I’ve read quite a few comments from members who seem personally insulted when they see someone wearing something they don’t agree with. This is hyperbole. This is like when Mr. Burns (from the Simpsons) puts his arms in the air and flails them about. I like to imagine these people doing the Mr. Burns flail. It’s that comical to me. So, when I discovered the person who submitted my photograph to this group (please note, it’s NOT the group owner) I wrote her a message and I didn’t rip her a new arsehole. I just couldn’t, you know? Here’s what I wrote:

Congratulations for contributing to girl on girl hate by contributing to a fatphobic and anti-woman facebook group. I don’t have anything against you personally for submitting my photo, but I encourage you to look at yours and other women’s bodies more positively. For your own benefit.

I’m still going to wear skinny jeans and tights, because there isn’t actually a weight limit and I am fairly impervious to body shame these days. I don’t know if you’ve heard of body acceptance, or fat acceptance, but I’m an active participant within the movement and I invite you to come check out some blogs and open your mind to an existence where you are free to love your body, instead of feeling ashamed of it.

I don’t want to attack you, because body negativity is encouraged in our society and it’s pretty much the norm to make fun of people to make ourselves feel better. Funny thing is, it doesn’t work like that. I could call you any name under the sun, and you’d only come back at me with more names, and none of us would get anywhere. For sisterhood, for solidarity, I wanted to reach out to you.

I am so privileged to have so many supporters, and I received a metric buttload of messages yesterday from so many wonderful people who reported the group, and the use of my photograph. I can’t help but feel sad for other people who have had their photo posted without permission, who don’t have so many people reporting the misuse of their images. I tried to go through and report as many as I could, and I encourage you to do the same. I’m not linking to the group, however, just because I don’t want to give it too much publicity.

Today I discovered that my photograph had been taken down by facebook but there are hundreds of other photos still up. I’m grateful that facebook actually took notice of the literal army of people who reported my photograph on my behalf, but it’s still sad that the group is still active. I don’t know the best way to combat this kind of harmful attitude, but I think discussion plays a big role. That’s why I wrote a note to the person who submitted my photograph, and that’s why I’m writing this blog entry. I want to contribute to productive discussion, even though a part of me wants to call them giant dirt-sucking arseholes.

Let me promise you, and me, one thing. I will NEVER stop being visible, online and offline because not only do I have a right to visibility, but when I make myself and my fatness visible I make this personal. I get the impression that members of this group don’t think the people in the photos they submit are real, but they are. And they write messages and blog posts, and have the support of the Fat-o-sphere as well as other allies, friends and family.