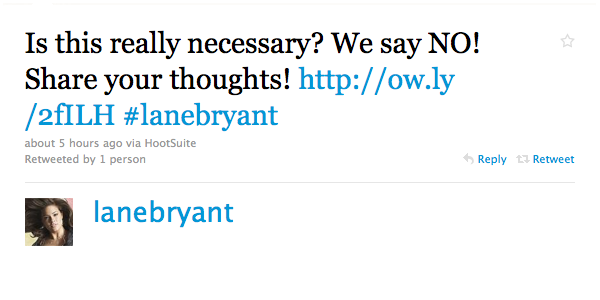 Let me preface this with a huge disclaimer: I’m Australian and I’ve never shopped at Lane Bryant, however I have bought a couple of Lane Bryant dresses second-hand via the fatshionista community. Through reading fat-o-sphere blogs, I’ve gained a bit of understanding about how LB have catered to a disenfranchised market and how for some people the store has been a gateway to body acceptance. That’s really cool.

Which is why it’s really odd to me to see Lane Bryant coming up to a certain line in the sand (i.e: the word FAT!) and then scurrying away. Most of their market probably still abhors the word, and little wonder given the huge and unjust abuse that fat people have to cop. I get that they might not want to engage in activism for fear of alienating a chunk of their market. But the world is changing, and body acceptance is a transformative thing. In the last few years fat phobia and bigotry has not been put to bed, but more and more people are transmitting the radical and viral notion that FAT IS A DESCRIPTIVE WORD. The internet has been quite the fabulous medium for the new size activism, and the recent explosion in the fat-o-sphere of plus size fashion blogs surely attests to my entirely unscientific observation that fat people are making themselves more visible.

So, I’m kind of disappointed to wake up to this: a frowny-faced link to my “Does my fat arse look fat in this?” shirt. It demonstrates a failure to understand their market. Yes, I know I said the majority of their market were probably still living in fear of the F word however Lane Bryant are not talking to those people on Twitter. No, on this medium Lane Bryant are talking to tech savvy, social media loving fatties who are likely well acquainted with the fat-o-sphere and size activism online.

How did the market respond? By voicing their strident disagreement and slapping a hashtag on it. Thanks Lauren! Personally, I’m agog that something I did could garner this amount of attention but I’m not surprised that the fat-o-sphere would react this way. The internet has given us a soapbox, dammit, and we will climb on top of it and preach until the damn box breaks under our weight. We’re a smart bunch who use humour to cope with the reality of being a hated, stigmatised, and usually headless group of people. Who else would adopt the “deathfatty” mantle with pride while eating “two whole cakes” and “baby flavoured donuts” while dressing up like “fat satan”?

That’s why the shirt I designed isn’t insulting, it’s empowering. I will stand by that. Lane Bryant, this is how your market is changing and why you really need to pay attention to medium. You might get away with all that “real woman” bullshit in traditional media, but the fatties on the internet have reclaimed the F word and we are spreading the message. (Pass it on!)