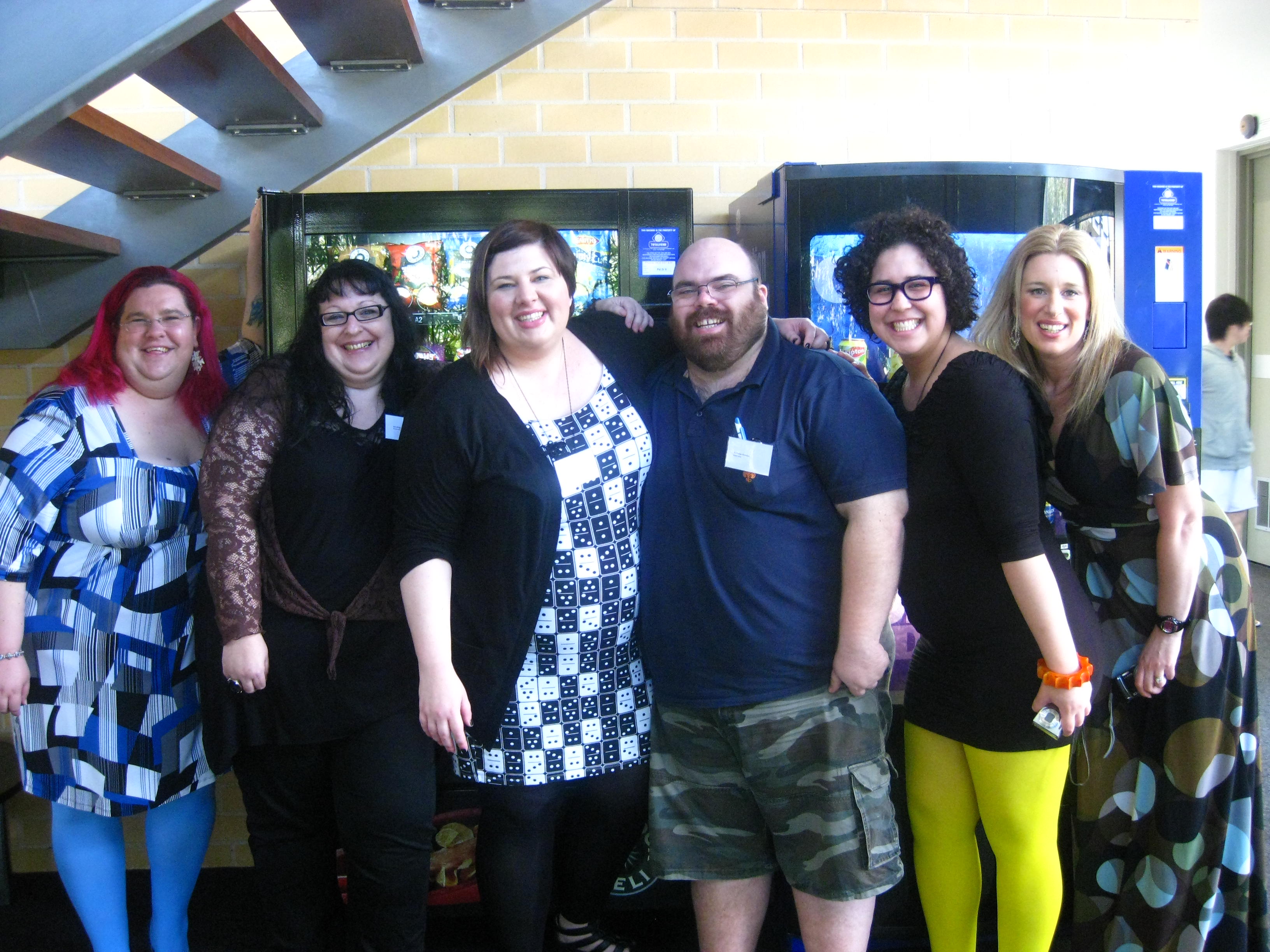 As I mentioned in my last post, the Fat Studies conference was incredible. I’m not sure where to begin telling you about the people I met, the talks I heard and the discussions I had but I figured I may as well do a round up of sorts of all the talks I went to. I hope to attend, maybe even present again, next year!

“I’d kill anyone who tried to take my band away”: Obesity surgery, critical fat politics and the “problem” of patient demand. Dr Karen Throsby, University of Warwick, UK.

Going into this presentation, the first of the conference, I was a little nervous. I knew a lot of the presentations were focused on fat activism and body diversity, but a few were about “health interventions” like gastric banding and bypass. I can be very defensive about body minimising and reduction practices and procedures and really appreciate spaces that don’t talk about them (such as specific blogs and forums within the fat-o-sphere that uphold anti-diet talk and anti-body negativity rules).

Karen’s presentation talked about ways of working critically in relationship to fatphobic practices like obesity surgery without alienating people who have had surgery or diet, or who want to. I can’t deny this isn’t a significant issue – many of my friends struggle with feeling like they ought to have surgery or go on diets (practices and procedures that pose significant health risks!) and I also have friends who have had surgery or gone on diets. Their struggle with wanting to be a part of fat activism and/ or acceptance while still desiring to reduce weight has been painfully clear to me.

I came out of this presentation hoping to be more open to discussion of the problematic body minimising practices and procedures with friends and peers who desire and have undergone them.

Kath’s talk was a personal account of her experience as a fat person, participating in weight minimisation for her “health” and having her health suffer deeply as a consequence. I think that people who go on about the “war on obesity” and the “obesity epidemic” fail to understand that fat bodies actually have human beings inside them, and that thin is not a direct path to good health. It is an approach that has fallout for these individuals, often leading to poor mental health as well as doing actual damage to the physical body through surgery and dieting. You can read Kath’s paper on her blog.

Why EVERYONE but fatties are allowed to be experts on “obesity”: A critical discussion. Dr Samantha Thomas, Monash University, Australia.

Samantha works in sociology and consumer research, and invests a lot of her time in researching why fat people aren’t treated as actual stakeholders when it comes to matters of medicalised “obesity”. Her talk really highlighted that society seems to make the fat person invisible while trying to figure out what to do about the problem of fatness. It was fascinating to hear her talk about what she does, and the things she has learnt while working with obesity researchers who are in favour of, and are funded by the manufacturers of, obesity surgery interventions like gastric banding. Samantha also does a lot of valuable work with the media, something I personally appreciate!

When I saw Shallow Hal, I was a little bit horrified. All I saw were reflections of the way my body was treated in the real world, and I never really investigated the actual desire between Hal (Jack Black) and Rosemary (Gwyneth Paltrow in a fatsuit). Jackie’s talk was fascinating because she proposed a queer reading of the film – saying that a fat person’s sexuality could indeed be read as queer to most mainstream people, because it’s a sexuality that is rarely if ever represented in popular culture.

Cleo’s talk was one I could connect with so personally. Being an artist type, not an academic, at a conference… it was pretty intimidating! I was moved to tears by Cleo’s spoken word piece at the end. She talked about having a fat femme body that was simultaneously feared and sexualised, with language and a delivery that so conjured the delicious femininity she embodied. I was so pleased to have chatted with Cleo afterwards, and hope to bring some of the awesome Sydney body diversity performance stuff up here to Brisbane with her guidance!

Charlotte Cooper is indeed one of the rock stars of fat activism. I was super stoked to be able to meet her and listen to her talk about the history of fat activists and their activism in the last forty years as well as the ways in which Charlotte has brought her rock and roll vibe to her own activism and research.

A particular highlight for me was watching the “Lovely and Slim” (or thin, I can’t remember!) short film in which a bunch of rad people jump around and and move their bodies to the tune of a catchy song that talks about how wonderful it is to have a thin body. I can relate to such facetiousness and irreverence and feel really inspired by the absurd nature of much of Charlotte’s activism!

Cleaning Out My Closets: Coming Out as Fat. Cat Pausé, Massey University, NZ.

Cat’s talk was happening as mine wound up and we came into the room, so I only caught the end. However I was really interested to see her diagram on the board – an altered diagram originally created by Erving Goffman on the ways to manage a stigmatised identity: passing, covering, withdrawing and Cat’s addition: Coming out.

The “coming out as fat” narrative was echoed ALL over the conference, even in my own talk, and I can totally attest to it as a fantastic way to combat having a stigmatised identity as a fat woman. I wish I’d caught the beginning of Cat’s talk but I’m pretty sure I loved it regardless!

Nicholosophy: A Man in the Fat-o-Sphere. Nicholas Perkins, nicholosophy.com, Australia.

When a presenter had to bow out at the last minute, Nick volunteered himself to give an impromptu talk and I was so proud of him! We have had some frequent discussions about the lack of male representation in the fat-o-sphere and fatshion blogs, and this was the topic of Nick’s presentation. He reflected on his reluctance to enter a space that was dominated by women and feminist discussion, and while understanding the need for such a space wondered why so many fat men weren’t also involved in talking about their own fat lived experiences. An excellent discussion ensued afterwards, and it was suggested that fat men actually browse butch fashion blogs for ideas on where to buy clothes and how to style them. I thought that was a fantastic idea!

You can watch Nick’s talk here.

When I saw four beautiful women in togs, I knew I needed to sit in on this panel. And how I’m glad I did! Amy of Fat Femme Front talked about how she thought it was time for a group of fat femmes to come together to increase fat femme visibility (particularly within the Sydney queer community), fight fat phobia and discrimination, increase body positivity and encourage and support each other in a safe space.

Kelli Jean, Asha and Scarlett of Aquaporko then talked about how they came to join the fat sychronised swimming team as a way to find some love for their bodies in a world that tries to deny that self love. Their coming out narratives were so touching and personal, and it really encouraged me to attempt to start a Brisbane chapter of Aquaporko!! (If you’re in Brisbane and are interested, please get in contact with me through the comments or my contact form.)

I was really heartened to see the activism of these four women, particularly when it came not from the internet or the fat-o-sphere or any real idea of what people were doing with fat activism in other countries, but from themselves and their own desire to make their bodies visible. It really seems to me that the past year or so has seen a number of people start to question the cultural assumptions about fat bodies, and a desire to take part in very public activities where they can reclaim their bodies!

And now for some photos! It was so good to hang out with my Australian fat-o-sphere pals Frances, Bri, Samantha and Jackie as well as meet one of my heroes Kelli Jean Drinkwater, who I think had no idea how much we all love her! Now I have a NEW bunch of heroes in Aquaporko and Fat Femme Front too.

Looking forward to next year – thank you Sam Murray for organising it. You are brilliant and amazing!