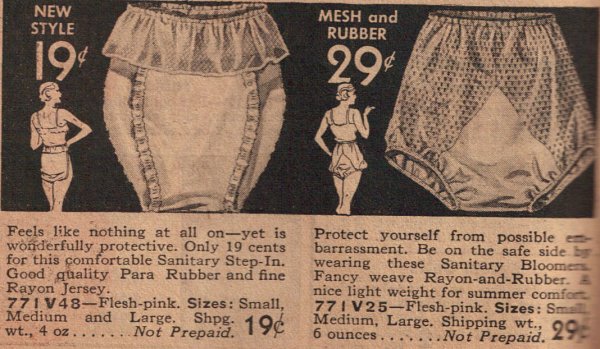 This post is about my reflections on using a menstrual cup over the last few months. It’ll be a frank discussion of the pros and cons of using the cup, so if you’re not keen for a bit of chat about menstruation and the various ways I’ve dealt with it I suggest clicking away!

When I first read a book that dealt with menstruation (was it Judy Blume? I can’t remember) it talked about using these scary contraptions consisting of belts and stuff that connected with them and it all seemed really confusing and horrible. The above advertisement doesn’t make it look scary at all but I dreaded getting my period until I realised that it was the ’90s and there had been some advancements in the menstrual product industry that did away with belts other such contraptions. When I got my first period I didn’t freak out because I’d been expecting it, and I went to the stash of pads my mother had given me in preparation for that day and went about my business. I didn’t even tell my mother until later!

Before disposable products were put on the market during last century, people had been using a huge variety of ways to deal with menstruation. At the bottom of this page on the Museum of Menstruation a retired teacher talks about her family’s methods and they include using sheepskin, cheesecloth and towels. I have a feeling that modern advancements towards disposable products, away from washing and reusing, have contributed to my own negative feelings about menstruation and period “blood” because with disposable products all I’ve ever had to do was throw stuff away instead of actually processing what my body was going through. When I first heard about menstrual cups I was admittedly pretty squicked. Of course it was the way the notion of cups had been presented to me that had led to my negative reaction because cups were framed in a “gross, omg collecting period blood to use for ~menstrual art~” way. That kind of thing seems to be the norm. Instead of thinking of menstruation as a normal thing, we’ve been told to speak about it in hushed and hygienic tones, divorcing ourselves from our bodies so that we can minimise contact with functions that make us animal.

It was about a year ago I started to rethink my initial reaction to menstrual cups. A few people I knew started using them and while some thought they were great, others found cups didn’t work for them. I was curious. I’d also done some calculations on how many pads and tampons I’d bought and disposed of in my life and the numbers were huge. Opting out of consumerism by saving money and reducing landfill appealed to me so I decided to investigate buying a cup.

Friends sent me links to information and I consumed it all furiously. There are a lot of people who love cups and even though one will suffice for a decade, some people collect them! Once I saw the different sorts I understood why because there are a lot, and choosing one can be confusing. Especially when you factor in materials, sizes, shapes AND colour! After talking with a friend about her experience I chose a Lunette Selene cup because it was cute and blue and had lots of good reviews. Unfortunately the Lunette site won’t sell the Selene directly to Australians but I purchased mine from Lady Freedom Store to get around that! (Note: I don’t condone the “lady” language used in a lot of cup sites because people who don’t identify as ladies or women menstruate too!)

When I first got my cup I couldn’t wait to use it. I have a history of really bad cramps and harrowing pre-menstrual mental health so looking forward to my period starting was strange! The most concerning thing for me was inserting the cup. Luckily there is a bunch of information available on different folds, and once I had the cup in my hands I could manipulate it into lots of different shapes. Some cups aren’t as easy to squash though, and that’s a huge drawback to buying a cup online without having any way to know how you can fold it to conform to your body to make you feel more comfortable.

Here’s some photos of the Lunette box I ordered from the Lady Freedom Store. If you order from the Lunette site you get extra cloth pads, but I didn’t get extras. I would photograph the cup but I’m kind of using it right now :P

Here’s a demonstration video with two folding techniques. A transcription is here.

There are plenty more ways to fold a cup than shown in this video! Don’t be afraid to experiment, because it’s most important to find a way that is comfortable and workable for you. I use a seven fold (I’ll add a link at the end to some folding techniques) and find that I have to run a finger around the cup to make sure it “pops” open properly, essential for collecting the menstrual fluid! Some people find running their cup under cold water before inserting helps it to pop open easier too. I haven’t trimmed the stem on my cup but many people find it helps especially if they have a lower cervix.

As a user of tampons and pads for over 15 years I was a bit scared of fitting the large Lunette in me – it’s considerably bigger than even a super tampon! Fortunately after handling the cup and finding out just how flexible it was I was somewhat relieved. People had told me that they couldn’t feel their cups inside them, but when I inserted mine at first I could definitely feel it. After a day I didn’t notice it so much, but on the first day of my period I can always feel it inside me. It takes some getting used to!

I was really worried about having to remove my cup during the day if I was out and about, but I’ve discovered a few things about my body and my menstruation over the last few months of cup use. I don’t have an especially heavy flow, and even on my first few days when it is at its heaviest, I can get away with 12 hours. So I wake up in the morning and get in the shower to empty the cup, and then at night time I have another shower and do the same. For some people though, they might need to change it more regularly, and in public toilets it’s not a particularly comfortable experience. I’ve seen people recommending squatting and above all staying relatively relaxed while removing cups. It can be frustrating and messy sometimes and when you’re in public or not in a safe or comfortable place, it can be a somewhat distressing experience.

When it comes to cleaning the cup while you have your period and once it’s finished, it’s pretty easy. As I empty my cup in the shower, I give it a good wash with hot water and simply reinsert. After my period has finished I boil it in a saucepan for five minutes and store in the pouch that came with it. Some people don’t bother boiling their cups and others use specialty cup washes or even dental cleaning tablets. I have no idea what the best method is, but I’m most comfortable with boiling my cup. I’ve seen complaints about certain cups being prone to staining, but sitting the cup in the sun for a day apparently helps sort that out.

Menstrual cups aren’t for everyone and it’s important to note that if you’ve got questions or concerning health conditions, you might want to discuss cup use with your health professional/s. For some people using a cup might be part of a range of ways of dealing with their menstruation, and going back to other methods (like pads and tampons) may alleviate distress, and I think that’s totally cool. I’ve seen lots of people in the cup community advocating for cups only, but that really ignores a lot of people who can’t use a cup all the time for whatever reason even if they really want to.

I have found that using a menstrual cup has made me feel more in tune with my body, and I’ve learnt a few things about it that have aided me in treating it better. My cramps are pretty much gone, something that really surprises me, and I feel a lot more hygienic at night time because I can wear the cup for 12 hours at a time. I have marked my menstrual cycles in calendars for a long time but recently I downloaded the iPeriod app for my iPhone and find it has also helped me get used to using a cup. I am fortunate to have a regular cycle so I can anticipate the first day of my period but other people use a combination of cloth pads and liners with their cups to avoid the first day mess!

Overall my cup experience has been positive but I’m not going to lie – it’s been messy at times too – however I feel a lot more in tune and generally okay with my body and my self because of it. While I don’t look forward to my period or treat it with whimsical joy, I feel good about reducing land fill and not spending a tonne of money on products every month. Even though I am not the kind of person represented in tampon and pad ads, running through sprinklers or snorkling, I could do those things with a cup if I wanted to. But you know, I’m just getting on with life (but I guess that would make for a boring tampon commercial.)

Do you have any questions? Have you been using a cup and want to pass on resources? Let me know in the comments!