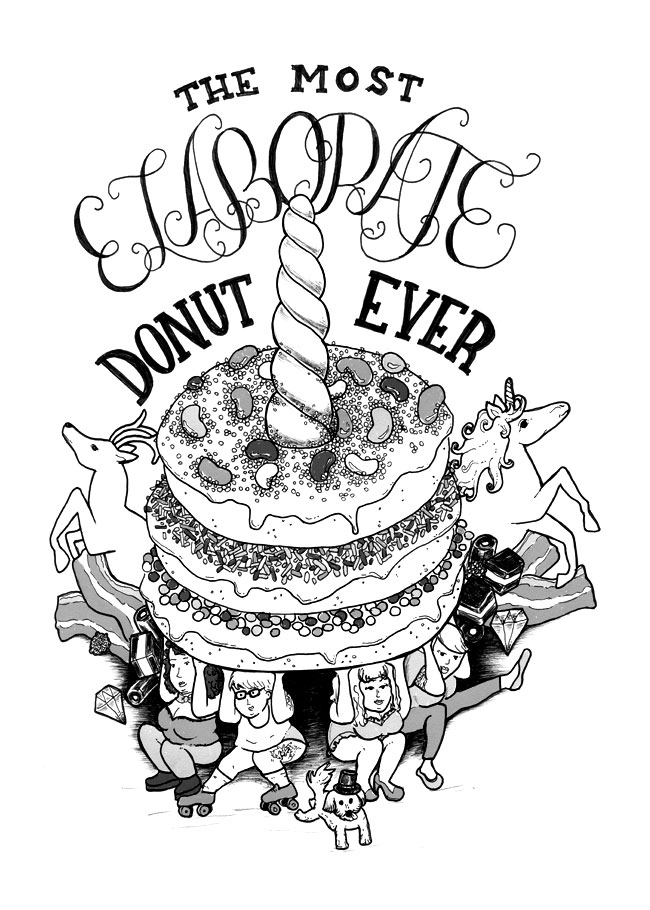 The other night I had a craving for a donut, but not a cinnamon sugar donut, more like an elaborate donut with sprinkles, fun, love, ticker-tape parades and a cheesecake filling. A donut as a metaphor for the things I can’t do right now, something that is elusive and out of reach signifying aspirations and hopes I’ve had to put on hold. I’m still feeling pretty wretched and every day is a struggle, so this “craving” sort of felt significant for me.

I haven’t done much drawing in the last six months, even though I’ve really really wanted to my cognitive abilities have been severely diminished. When I thought about what an elaborate donut might look like, I really wanted to draw it. So I started drawing, bit by bit. Then I added more and more until it looked like a new coat of arms for me!

I don’t know if I can adequately convey how proud I felt to finish this drawing but if you are a maker of things, you might have some idea. Lots of things pop in and out of my head and most of them are forgotten, some of them are written down and a miniscule percentage are actually acted upon. To pull tangible things out of your brain is a painful experience and requires concentration, revision, memory, composition, editing and diligence. In my current situation this is made even more difficult, so being able to put my elaborate donut down on paper feels like a massive achievement.

Lots of people ask me if I’d ever do a colouring book of my drawings and in the past I never gave much thought to it, but this drawing seems more like the type of thing that might be enjoyable to colour in. I’ve been colouring Nicole Lorenz’s Fat Ladies in Spaaaaace book over the last few weeks and loving the hell out of it, so when people responded so positively to this drawing on Tumblr and asked if I would make a colouring book… I started to think that I might actually pursue the idea.

What do you think? Would you like to colour in my metaphorical food cravings?