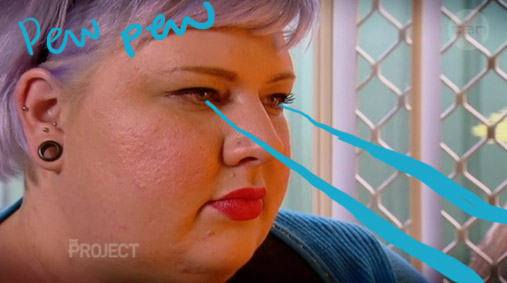 I was going to write a big post about my (and Nick and Miffy’s!) appearance last night on The Project but I have compiled a rushed recap instead because I had to get off the couch to do this and we are in a co-dependent relationship. First, here is the video for your viewing pleasure (if you are outside Australia it may not work but give it a go anyway.) I’m anticipating that this embed won’t work, so here’s a link to the video on the website.

We open with the classic fat zinger footage, headless fatties and motorised scooters. Fat people going about their days having their butts filmed without permission, drinking drinks and shopping for food like they aren’t essential requirements for living or anything.

It’s not really called Fat Pride, or that’s not what Nick and I identify with. We say we are fat activists. There are zero things wrong with being proud of your body (at whatever size) but it’s hard for many fat people to find pride because of the burden of stigma, and “fat pride” doesn’t welcome those folks. We talk about stigma, frustration, ill treatment and at a very basic level, try to reach people with the message that fat people are humans and we have heads.

Nick and I arrive. We talk about stigma against fat people. Dr Sam Thomas arrives, talks about overstatement of risks of being fat.

Anna Peeters arrives, we are worrying her with our fatness, she is part of a society for obesity. I wonder if any fat people are in that society? Probably not. Her testimony about health risks makes aforementioned fatties seem all footloose and fancy free, but fails to consider the non-fat related illnesses they have. Also it’s very nice they care so much about scaring fat people, I wonder if Stephen King advises them on their thriller skillz. Can we get a price check on who is funding the ANZOS please? Considering Peeters worked for C.O.R.E at Monash, who are funded in part by Allergan (A LAP BAND MANUFACTURER), I am highly dubious.

Peeters redeems the case for fat stigma when she says it exists. Unfortunately most viewers probably didn’t believe us when we said that first. Thomas agrees, SOCIETY IS FIGHTING FAT PEOPLE. All we wanna do is have a groovy time and daydream about unicorns — WAIT THERE IS MIFFY. Nick and I demonstrate that we can walk.

Happy music, focus on our blogging! Dramatic music change, I am concentrating very hard on doing up a jump ring on my fat necklace for the 100th time. Peeters bastardises the Sound of Music and stages an elaborate number called, “How do you solve a problem like fat people?”


We return to comments from non-fat panelists because they have feelings and opinions.

Charlie Pickering says we do judge people based on weight. Another thin person legitimising things fat people said first! I would give him a cookie but I ate them all.

Waleed Aly pulls out the concern troll card, which coincidentally wields an internet connection and a false sense of entitlement if you look closely. He thinks we are driven to being fat by stigma. Oh so it’s not like our bodies and personal health, environment, class, race, gender have anything do do with it. Thinking is hard for many non-fat people.

Kath Robinson admirably doesn’t even bother with concern – FAT PEOPLE ARE INTENTIONALLY BEING FAT AND STIGMATISING THEMSELVES. “These people could potentially be unhealthy and risk bad health problems!” Like suicide and death by neglectful health professionals or NOT seeking medical help because they know they’ll be treated awfully! At this stage I am laughing bitterly and bringing fat forehead to fat palm with rapid and great energy.

Lehmo, who only has one name because he is special and important, winds up for his big finish: “if you need a motorised cart to get around then you need to lose weight”. What ableist guff that doesn’t consider the intersection of fat & disability! (Not that I expected that degree of nuance on a light entertainment teev program.) Fat people on scooters don’t do it because they think it’s cool and hip and that people will say “SWEET RIDE YOU ARE COOL”. Fat people on scooters get abused because they are fat and SO RUDELY using mobility tools to move about their lives!

EVERYONE LAUGHS AT A FAT JOKE
THE END